At the start of the SDP program, Fairfield school leaders worked with their 5Essentials Leadership Coach on analyzing 5Essentials Survey results to dig deeper into relationships between students and teachers. They saw that almost 20 percent of students surveyed felt they weren’t treated with respect by their teachers. That same year, 72 percent of teachers felt their students were disrespectful.

In order to gain a better understanding of what was happening inside the classroom between students and teachers, Lopez and her team reviewed misconduct reports from the previous year. The reports revealed a trend of adult responses escalating incidents of challenging student behavior to punitive disciplinary action.

After analyzing the data, Lopez and her 5Essentials School Leadership Coach created an improvement plan focused on improving student and teacher relationships by restructuring discipline trainings and protocols.

As part of that plan, the same disciplinary data were shared with teachers who were subsequently trained on using relational discipline methods rather than punitive ones. The training emphasized methods such as listening to students and working to make them feel heard, considering each student’s’ individual context when determining appropriate discipline, and continually cultivating a classroom culture of respect.

Both leadership and teachers reviewed case studies based on misconduct reports and discussed how, in similar situations, teachers could hold students accountable for their behavior while still maintaining positive relationships with them.

In order to improve Academic Personalism and students’ perception of the academic standards held by their teachers, Lopez began regularly meeting with teachers to analyze student achievement data and progress. Then, they set growth goals for individual students and communicated those goals to students.

Fairfield’s score for the Supportive Environment Essential improved by 8 points in 2017-2018 while the district’s average score on the same Essential declined by 3 points. Within this Essential, the school’s two areas of focus, Academic Personalism and Student-Teacher Trust, both improved. Specifically, results for Academic Personalism improved by 14 points while the district’s average score remained unchanged. They also saw Student-Teacher Trust improve by 2 points whereas the district average score on the same Measure declined by 3 points. 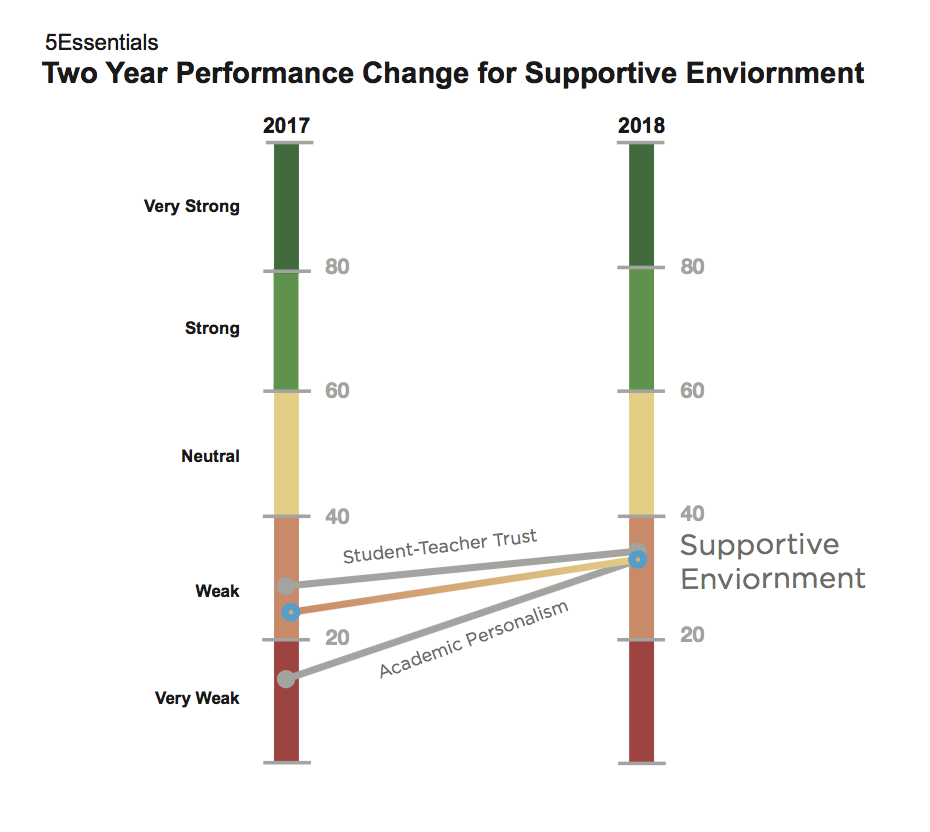 significantly. During the 2017-2018 school year, they issued 32 out-of-school suspensions. Principal Lopez believes that the school’s work with UChicago Impact to build strong relationships between teachers and students led to the school's significant decrease in suspensions.

In the coming school year, UChicago Impact will continue partnering with Fairfield shifting their focus to improving Collaborative Practices through strengthening teacher leadership and data analysis.

Understanding the Art and Science of STEP: Frequently Asked Questions

A child's education isn't a dress rehearsal. We have one chance to get it right and the 5Essentials Survey helps keep us focused while holding us accountable.